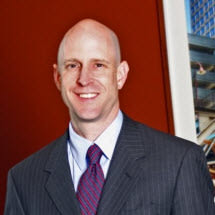 Mr. Jacobs grew up in the south suburbs of Chicago. He graduated from Thornwood High School in South Holland in 1989, Eastern Illinois University in 1993 and the Creighton University School of Law in 1996. He is licensed to practice in Illinois state court as well as the United States District Court for the Northern District of Illinois.

Mr. Jacobs, while in law school, interned for the United State's Attorney's Office for the District of Nebraska. After graduation from law school, he started his professional career working for a prominent Chicago personal injury plaintiff's firm. He then went on to work for a premier Chicago defense firm specializing in the defense of physicians, hospitals and healthcare systems. It is there that he learned the techniques, tactics and insight into defense strategy. In essence, he learned 'how the other side thinks'. He went on to start his own law firm in 2006 where he has been representing plaintiff's exclusively ever since.

He is also involved in coaching his sons' various youth sports teams.